We want to thank everyone who attended the Annual Anderson Christmas Party on Thursday, December 15th, 2016. Surrounded by all of the Anderson employees and their loved ones, we had a wonderful time at The Inn at the Old Silk Mill located in Downtown Fredericksburg.

We also would like to thank Karen Jonas and Tim Bray for the beautiful music. Jonas' new album, Country Songs, is out now! The Sunken Well Tavern provided the delicious dinner buffet. The buffet included crab dip, pigs in a blanket, sliders, mac & cheese, BBQ chicken, filet mignon, salad, collard greens, and crab cakes! Even though everyone was full from all of the tasty food, they still had room for dessert... cake from Paul's Bakery!

After everyone ate, Mark Anderson, the President of The Anderson Companies, thanked all of the employees for their hard work this year. Mark then called out the raffle winners, each winner chose their prize from the gift table.

The gift table at the Anderson Christmas Party.

The Senior Vice President, Nicole Cameli, spoke after Mark. She expressed how thankful she is to be a part of the Anderson Companies and thanked the employees for making 2016 a great year.

Just when everyone thought the Christmas Party could not get any better, it was time to play Left Center Right! The lucky winner was Todd, an Anderson Leonarkis Construction employee. 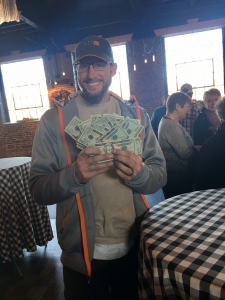 After Left Center Right, the Administrative Assistant, Jan LaVan, announced some more winners of the raffle. This time, the winners chose between three empty boxes numbered 1, 2, and 3. The first person called won a Roku TV, the second called won a flat screen 48 inch TV, and the third called won a Yeti Cooler!

After the last raffle winners were called, Mark thanked everyone for attending, and that was a wrap! Between the delicious food, presents, and good company, it was evident that everyone had a great time at the Christmas Party. Anderson Oil Company, Anderson Propane Service, and Anderson Leonarkis Construction appreciate all the hard work and dedication from our employees and it was a pleasure to return the favor with gratitude, fun games, and presents.

On behalf of The Anderson Companies, we want to wish you and your loved ones a Happy Holiday and a Happy New Year! 2016 was a spectacular year and we look forward to an even better 2017!

View all posts by: Bekah Constien